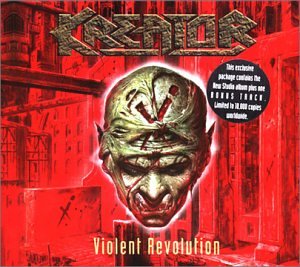 In the sixteenth year of their career, Kreator continue to assert their long-standing position as spearheads of the German thrash metal scene. Kreator aren?t what you?d call a purely German phenomenon, they are a prime Teutonic export article with an impressive track record of over one million albums sold worldwide, their touring history includes seven tours in the US ! After a temporary foray into more melodic fields, band mastermind Mille Petroz and his recently restructured group present an up-dated version of their metallic origins on their new album Violent Revolution: thrash metal, forged with as much precision as you can get in 2001. The tracks on Violent Revolution sound like the album title: unyielding, rigorous, and powerful.